Last week several important economic updates influenced the Forex market. US preliminary GDP fell less than expected (0.6% actual vs. 0.7% forecast). However, business activity in the American private sector contracted at a stronger pace in early August than it did in July as the manufacturing and composite Purchasing Managers Index (PMI) fell.

The same indicator for the euro area also plunged to its lowest in the last 26 months. As a result, EURUSD slipped below the parity level. The highlight of the week was the speech of the Fed Chair Jerome Powell in Jackson Hole. He said that higher interest rates will remain in place for a prolonged period if inflation doesn’t slow. As a result, the USD strengthened against other currencies. Th US Dollar index jumped above the 109 level.

Below you will find the key events to trade on during the week from August 29 to September 2.

Germany will publish the Preliminary Inflation Rate, also known as Consumer Price Index, on Tuesday, August 30, at 15:00 GMT+3. This release represents the change in the price of goods and services purchased by consumers during the previous month.

The inflation in the Eurozone and Germany, in particular, remains at high levels due to high energy prices and Russia's invasion of Ukraine. The rise in this indicator provides a hawkish signal to the European Central Bank, which is responsible for monetary policy decisions.

Last time, the consumer price index increased 0.9% in July over the previous month. It pushed the EURUSD higher by 0.6% right after the release. The US ISM Manufacturing PMI

The US ISM Manufacturing PMI will be released on Thursday, September 1, at 17:00 GMT+3. This is the diffusion index based on surveyed purchasing managers of the manufacturing industry.

Once a month, the Institute for Supply Management surveys about 300 purchasing managers. The respondents answer the questions and rate the relative level of business conditions, including employment, production, new orders, prices, and other important economic indicators. If they are sure that the economy is getting better, the index is above 50. Otherwise, it is below 50.

During the previous month, the indicator came out better than the forecasts; it reached 52.8 vs. 52.3 expected. EURUSD immediately dropped but managed to restore its position after the release. The US Nonfarm Payrolls

The United States will publish Nonfarm Payrolls (NFP), also known as Non-Farm Employment Change, on Friday, September 2, at 15:30 GMT+3. This indicator represents the change in the number of employed people for the previous month, excluding the farming industry. It relates to other essential indicators of employment: the unemployment rate and the average hourly earnings.

Although the release of Nonfarm Payrolls does not move the Forex as much as it did in previous years, it still helps intraday traders to make worthy trades. Last time, the release significantly outperformed the expectations with an increase of 528K vs. the forecast of +250K. The average hourly earnings and the unemployment rate beat the consensus as well. The data resulted in the strength of the USD and the weakness of gold. 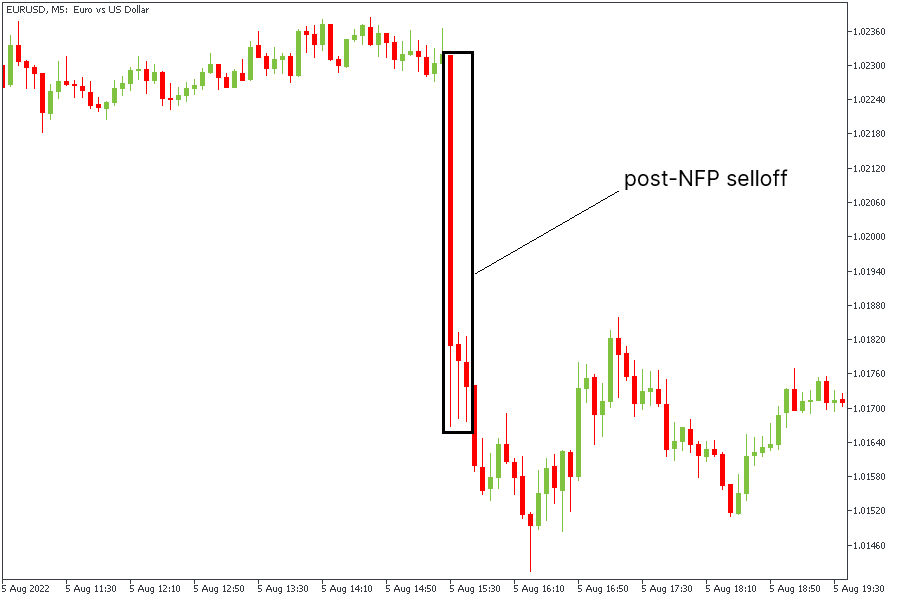