The giant chip maker exceeded analysts’ expectations. Even with a global GPU shortage! NVIDIA mainly produces semiconductors for the graphics and networking segment, which includes chips for data centers, automobiles, and robots. And, the company revealed awesome results for both! Graphics was up 47% from the same period last year. Networking was up 91% year-over-year.

The company is planning to launch new graphics cards for mining cryptocurrencies in March, but CEO Jensen Huang disappointed a bit its customers as he said: “We expect that to be a small part of our business as we go forward”.

Nvidia is going to buy ARM from Softbank for $40 billion, which will boost its semiconductor industry as ARM develops low-power chips — and it supplies technology to most of Nvidia’s competitors. “We are making good progress toward acquiring Arm, which will create enormous new opportunities for the entire ecosystem,” Nvidia CEO Jensen Huang said.

After revealing such great results, Nvidia has no other chance as to rocket to fresh highs! The way up to the high of February 18 at $615.00 is open now. However, this resistance is on the upper trend line, therefore, the price may struggle to escape the current channel. But who knows! Just in case, be aware of support levels at $540.00 and $500.00. 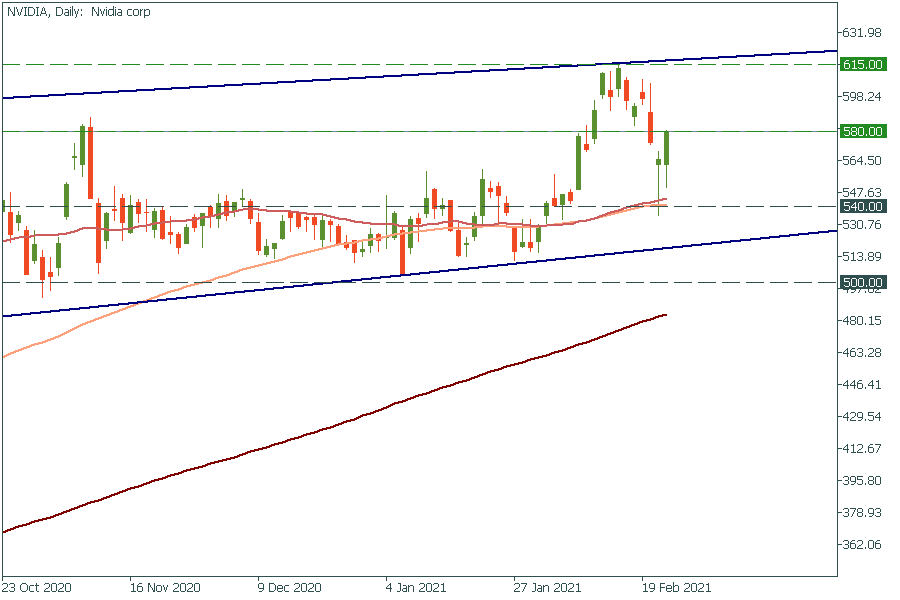