Russian Oil Got Banned from Market

The pressure has been building in the oil market since the end of February when Russia, the world's third-largest oil producer, unexpectedly invaded neighboring Ukraine. Traders and investors feared that oil supply from the country would decline, so Brent oil went up to $100, then $110, and $120 a barrel. This week started with the talk of the United States banning Russian oil exports, so XBR/USD saw $130 a barrel. Then the ban became reality. What does it really mean for the market? Where should our new oil price targets be?

The purpose of the US banning Russian oil is to cut Vladimir Putin’s government from its key income source and force him to step back from Ukraine. The UK has partly joined the ban on Russian oil, while other European nations so far decided not to participate because they rely on Russian imports too much.

Biden’s decision obviously shows that America is serious in its decision to block Russia economically and financially. For now, it’s not clear yet how exactly the ban will enfold, because some oil is already in transit. In addition, Russian oil accounted for only about 3% of oil imported in the US last year. As a result, America’s decision shouldn't be that big a game-changer, at least at the first sight.

Another important thing: the ban will inevitably have severe consequences for the US economy. Gasoline prices are already at record highs, and Americans may start blaming Biden for that. Moreover, high fuel prices trigger inflation and hamper economic growth. Therefore, Biden will likely face difficulties implementing his policies in the longer term.

Can Venezuela and Iran get back to the oil market?

There are media reports that the US may ease restrictions for Venezuela. According to Bloomberg, the US and Venezuelan officials met over the weekend and discussed the issue. However, it’s necessary to take into account the fact that the Latin American nation may need time and money to restore its oil production industry, so months will pass before it’s able to deliver more oil. Venezuela currently produces 800,000 barrels a day. According to conservative forecasts, the amount may increase to 1-1.1 million barrels a day by the end of the year. The country would need massive investments to produce more.

Finally, the International Energy Agency agreed to release 60 million barrels from its members’ strategic petroleum reserves. However, that’s not enough to replace the loss of Russian supply. We also know that IEA members hold emergency stockpiles of 1.5 billion barrels. Theoretically, they can release more oil to the market, but they obviously won’t be glad to reduce stockpiles. Another way for Western nations is to pressure China and India to release their stockpiles and pressure OPEC to increase production. However, Saudi Arabia and the UAE, the leading OPEC members, appear to be siding with Russia. As for the US, production was almost 11.6 million barrels a day in December, up from a low of 9.7 mbd in February of 2021, but below the nearly 13 million barrels recorded in the run-up to the pandemic.

Overall, we can see that if Russian oil disappears, the market won’t be able to compensate for it fast. That, in turn, creates a bullish environment for prices. Global oil prices are already up by about 60% since the start of the year. Yet, it may turn out that this move was just the beginning.

Where’s the ceiling for oil prices?

Now oil is moved by fundamental factors more than by technical ones. Even though Brent oil is overbought, the market’s nervousness can push it even higher. Above $130, the next levels to watch will be $140 and $150. The price can easily move by more than $10 a day both ways – up and down. The key support levels are located at $110 and $100. 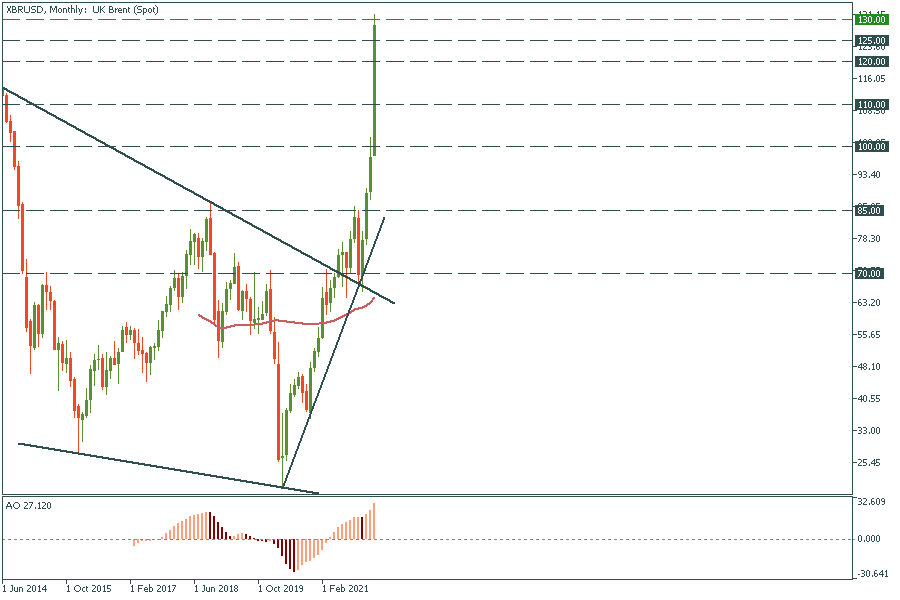 To get fresh and relevant information that will help you profit in oil trading, visit the energies section on the FBS site. You can trade oil with FBS via MetaTrader 4 and 5, and FBS Trader App. Brent oil is traded as XBR/USD, and crude is XTI/USD. What will happen? The Organization of the Petroleum Exporting Countries and 10 additional oil-exporting countries, including Russia, will hold a videoconference on July 1…