The Federal Reserve will update on interest rates and monetary policy on Wednesday, November 2, at 21:00 GMT+3. As usual, the release of the FOMC Statement and the Federal Funds Rate will be followed by the Press Conference with Fed Chair Jerome Powell at 21:30 GMT+3.

The Federal Reserve publishes the FOMC Statement eight times a year. It contains FOMC members’ votes on interest rates, monetary policy measures, current economic conditions, and further prospects. The interest rate decision is usually priced into the market. Thus, traders track changes in the statement and try to predict the next steps by the Fed.

This is one of the most important events for the market right now. The Federal Reserve is in the midst of its fight against high inflation, which hit 8.2% compared to 8.3% in August but above market forecasts of 8.1%. Analysts expect the regulator to raise the interest rate by 75 basis points to 4% in the meeting. At the same time, traders will look at the signs of a slower pace of rate hikes in the following meetings as inflation gets lower. Some Fed speakers have already expressed cautiousness in their speeches.

Last time, the USD was highly volatile during the event. For example, EURUSD fell right after the update, then stabilized during the Fed Chair Press Conference, and finally dropped back to the daily lows. Every month, the Bank of England makes a decision concerning monetary policy based on the current economic situation and future outlook. As the interest rate decision is usually priced into the market, traders pay attention to the hints at future changes in the Monetary Policy Summary.

The previous weeks were intense for the British pound. First, Liz Truss presented the controversial tax-cutting plan, which resulted in a heavy selloff of the GBP. Second, she could not withstand the pressure and resigned. Finally, her place in the Cabinet on Downing Street was taken by the ex-Finance Minister Rishi Sunak, who is believed to be "friendly" to the markets. Overall, the pound regained its strength and wiped out September's losses by more than 3%. Now it's the Bank of England's turn to shake the British currency. The bank is expected to raise the interest rate by 50 basis points to 3%. While the market is now pricing in the interest rate beyond 5% in 2023, some experts question the possibility of this scenario. According to them, an interest rate above 5% will damage the economy. So, if the bank hints at changes in the upcoming interest rate decisions, the GBP will be volatile.

Last time the meeting was almost a non-event for the pound, as the BOE released everything in line with the forecasts. The United States will publish Nonfarm Payrolls (NFP), also known as Nonfarm Employment Change, on Friday, November 4, at 15:30 GMT+3. As usual, the release will be followed by two other crucial indicators: Average Hourly Earnings and the Unemployment Rate.

NFP represents the change in the number of employed people during the previous month, excluding the farming industry. This is the most up-to-date US employment data that helps to analyze the country's current economic conditions. Due to its earliness, it tends to bring a lot of intraday volatility to the USD, American stocks, and gold. Significant wage changes (average hourly earnings) and the Unemployment Rate also affect the market.

During the previous release, a combination of blasting NFP figures (263K vs. 248K expected), lower-than-expected Unemployment Rate (3.5% vs. the forecast of 3.7%), and stable Average Hourly Earnings supported the US Dollar. Will it happen again? 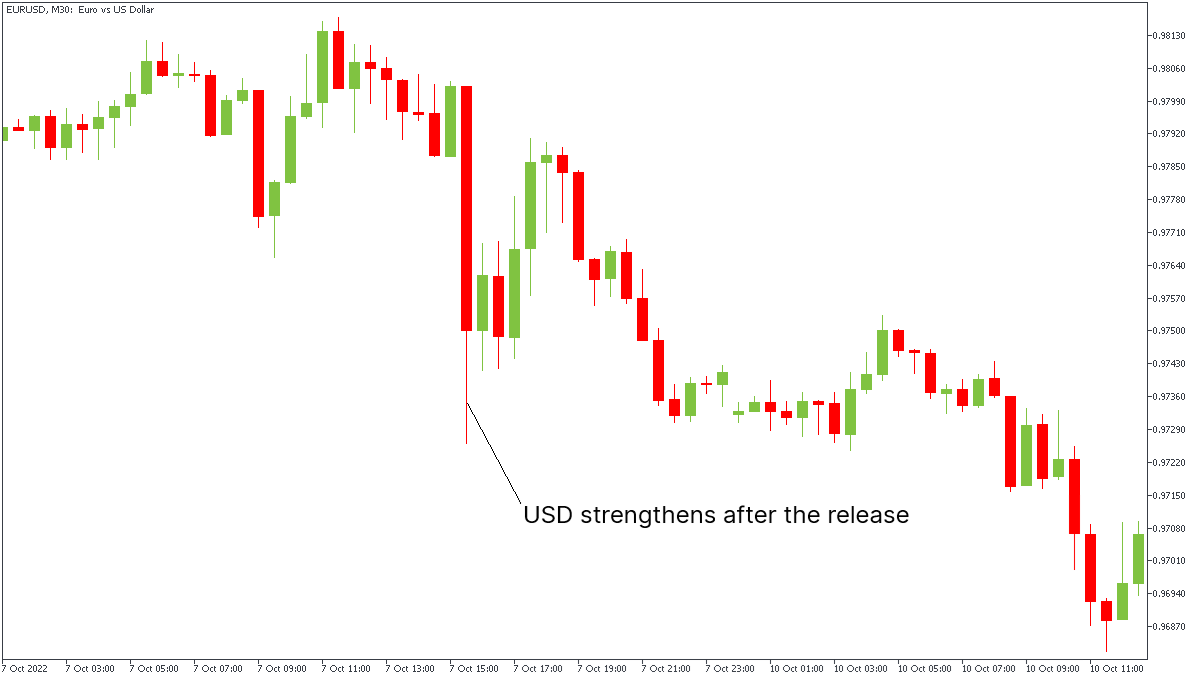