What Is a Hammer Candlestick Pattern?

The Hammer candlestick is a pattern that appears at the end of a downtrend. It consists of a small real body and a long lower shadow. The shadow should be at least twice the size of the body. A small real body means a small range between the opening and closing prices. A long lower tale indicates that bears tried to pull the price to the fresh lows but failed to continue the downtrend. The pattern's color can be either bullish or bearish, although the signal is more substantial if it's bullish.

The picture below shows bullish and bearish examples of this pattern. There is also an Inverted Hammer candlestick pattern, which looks like a reversed Hammer. Apart from the regular Hammer candle, it consists of a small regular body and an upper shadow (tale) at least twice bigger than the body. The formation of the pattern signals the start of an uptrend as well.

In the picture below, you can see bullish and bearish Inverted Hammers. Hammers can appear on any timeframes and the charts of any instruments: stocks, Forex, metals, crypto, etc.

How Does Hammer Candlestick Pattern Work?

When the price moves in a downtrend and reaches a significant and strong support level, you must be extremely careful and prepare for a potential reversal. If the price moves significantly below the candle's opening price but quickly recovers, it forms the Hammer chart candlestick pattern. The pattern is recommended to be bullish or confirmed by the following bullish candlestick. A Buy Stop order should be placed at the opening price of the next candlestick after the confirmation. A protective Stop Loss should be placed below the Hammer's low or at the opening (for bullish) or closing (for bearish) price of the candle’s real body. The signal is stronger on the higher timeframe. The picture above shows an example of placing a Buy Stop order with a Stop Loss and Take Profit after the Hammer Pattern appeared during the downtrend. We placed Stop Loss below the low of the pattern. Take Profit was set at a distance three times bigger than the one between the SL level and Buy Stop.

What Does Hammer Candlestick Pattern Mean?

As mentioned in the previous paragraphs, the appearance of the Hammer Candlestick on the chart itself does not predict the reversal. Also, there is no evidence that the price will continue forming an uptrend after the confirmation candle. If the momentum is strong with a long-shadowed hammer and big confirmation candle, the price may become too high from its stop loss level, which is risky.

It's also quite hard to set the price target with hammers. Therefore, exits should be based on other analytical insights: key levels or other candlestick patterns.

How to Use a Hammer Candlestick

Traders can use the Hammer candlestick pattern as an additional tool for analyzing the market performance or as a part of their trading strategy. If a trader follows the intraday opportunities on smaller timeframes (H1), a Hammer pattern near the daily support may help identify a Buy entry. You can find an example of the entry at significant support in the picture below. 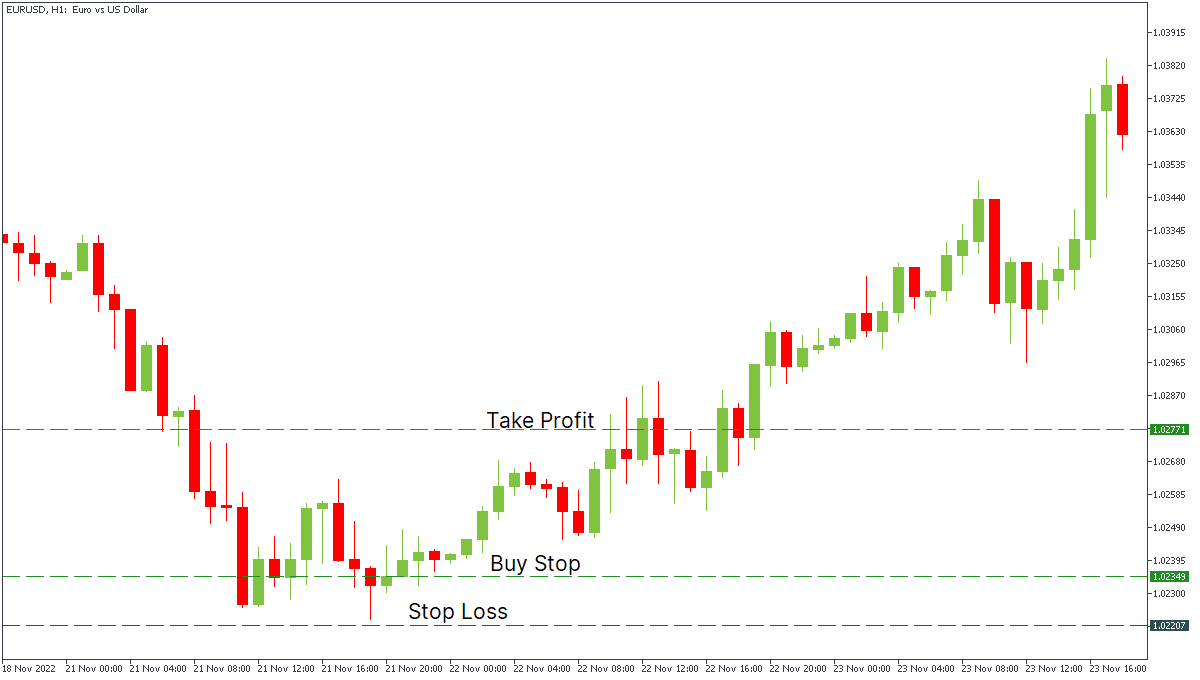 On bigger timeframes (such as weekly), the Hammer candlestick demonstrates a prolonged trend change.

What is The Difference Between a Hammer Candlestick and a Doji?

Apart from the Hammer candlestick, a Doji has a tiny body or no body at all. This type of candlestick shows market indecision when neither bulls nor bears dominate. A single Doji is neutral, but if it appears after a series of bullish candles with long bodies, it signals that buyers are becoming weak, and the price may reverse to the downside. Alternatively, if Doji forms after a series of bearish candles with long bodies, sellers are losing their strength, and the price may rise. The Hammer candlestick, in its turn, has a unique shape. If it appears during the downtrend, it signals the reversal to the upside.

Is a Hammer Candlestick Pattern Bullish?

What Is the Difference Between a Hammer Candlestick and a Shooting Star?

Although Shooting Star looks precisely similar to the Inverted Hammer, it appears at the end of an ascending trend. The Hammer pattern is a one-candlestick pattern that appears during the downtrend and indicates the reversal to the upside. There is also an inverted candlestick pattern with a long upper shadow, which marks an uptrend's start. The long upper shadow implies that the market tried to find where resistance and support were located, but bears rejected the upside.

The Hammer candlestick patterns are recognizable and relatively easy elements of candlestick chart analysis. While it may indicate a change in the trend, it requires confirmation. Thus, it's not recommended to follow the signals blindly.

A Cup and Handle price pattern is a technical chart setup that resembles a cup with a handle.

According to coinmarketcap.com, there are more than 9250 different cryptocurrencies. And those are registered ones, with twice as much hidden from view. An article describing them would take a year to read and won’t make any sense as half of these cryptocurrencies are already inactive.

Most traders prefer to trade using technical indicators like RSI and MACD. Others love using a bare chart to make their decisions.