Preview into the FOMC meeting

Pay attention: the FOMC meeting is today at 21:00 MT time

Why is it so important?

No changes to the interest rate are expected. The Fed will publish the statement, which will contain the commentary about the economic conditions, discuss the economic outlook and offer clues on the future path of the monetary policy.

The recent comments by policymakers on a rate cut later this year increased worries in the market.

In addition, various inflation measures dropped below the 2% target and raised concerns over the rate cut even more.

As the dovish expectations are already priced in, any hawkish comments by the Fed Chair Jerome Powell will bring positive momentum to the USD. On the other hand, strong dovish tone of the statement will weaken the greenback. On the same timeframe, the USD rose against the JPY at the beginning of the day but was not able to stick near the 100-hour SMA. At the moment of writing, the pair has been moving towards the support at 108.35. The next support levels are placed at 108.28 and 108.24. On the other hand, bulls keep their eyes on the resistance level at 108.44. If it is broken, the pair will rise further where it will face the 108.49 and 108.53 levels as resistances. 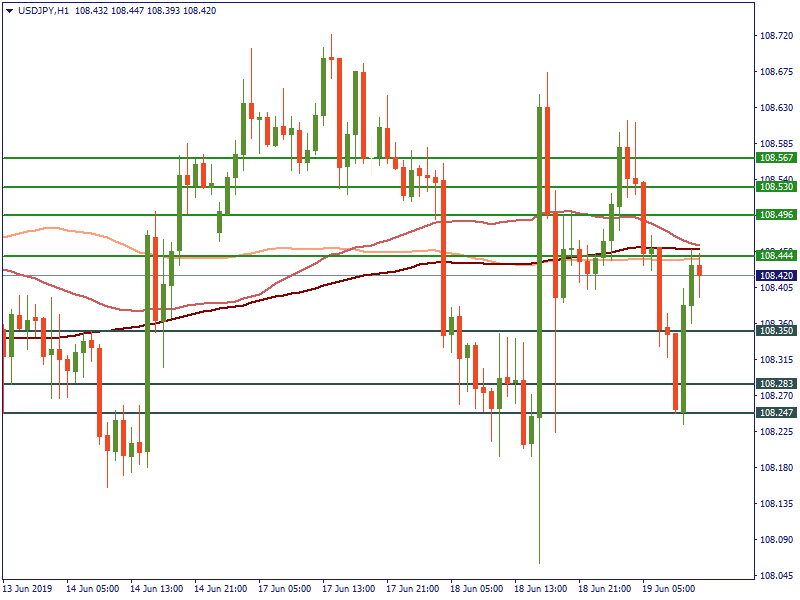