Catch these risk-on movements on June 3

EUR and risky currencies, stocks and oil prices surged on prospect for reopening.

It looks like investors turned a blind eye to the US-China trade war. By the way, violent protests have increased in most American cities after Donald Trump promised to deploy military troops to stop them. Nevertheless, the market is mainly focused on the optimistic outlook for economies reopening as lockdowns eased all over the world and life started to come back to normal. EUR is moving up

EUR gained on the weak US dollar and the upcoming ECB meeting on June 4 at 14:45 MT time. Analysts expect that the central bank will increase the rescue program by additional 500 billion euros of asset purchases. If EUR crosses the resistance level at 1.121, it will rise further to 1.124. Support levels are 1.117 and 1.11. As you know, the Australian dollar is really sensitive to the market sentiment. And, today it’s really risk-on! AUD continues climbing up. It has just passed the resistance at 0.69. Now it’s approaching the highest level of this year at 0.7. Support levels are 0.69 and 0.675. The market continues surprising us today. The Brent oil price has just crossed the unseen level since March 6 – $40 a barrel. If the price breaks out the 100-day moving average, it even may skyrocket to $45. Support levels are 36 and 34. The reason behind is that OPEC+ heads to expand the output cuts. However, things may not be so sunny. Russia may reject to extend supply cuts as rival shale producers can open their taps again on increasing oil prices. 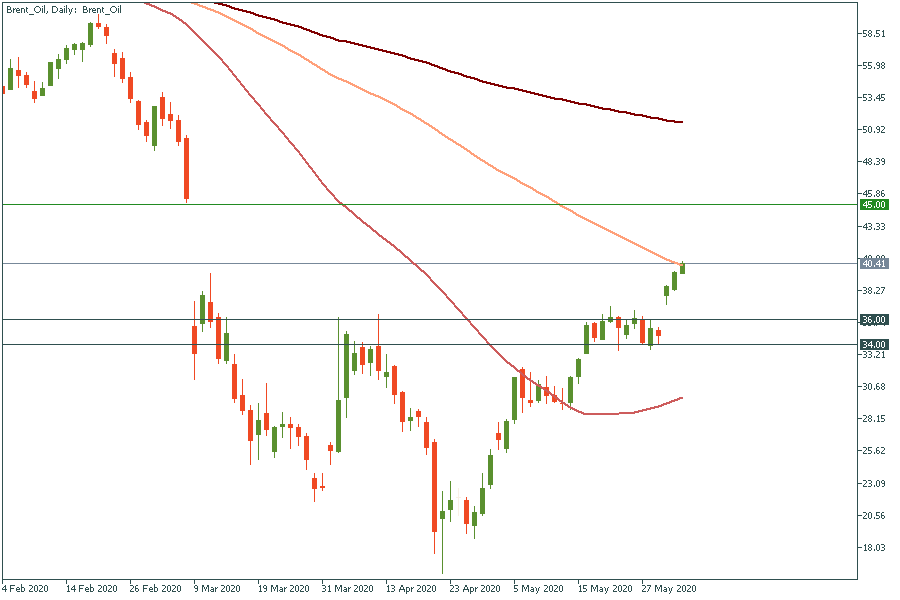