In November, one US dollar was worth 8.5 Turkish liras - as many as never before. Going through turbulent ups and downs, the Turkish lira was depreciating at an accelerating pace. That month, Naci Agbal was appointed the Turkish Central Bank's governor. He immediately started steering the economy out of the crisis by increasing the rate to fight inflation. That started working: from above 8.00 in November 2020, USD/TRY dropped to 7.00 in February. There was a recent spike, though, but it was suppressed down to 7.20.

Nevertheless, the Turkish lira was destined to see its dreams of appreciation crushed. The tenure of the Turkish Central Bank's governor Naci Agbal was suddenly terminated - as was his course for the lira's restoration. As a result, USD/TRY shot up to 8.50 erasing all the gains of the lira. Global investors were spooked by this event - it completely undermines their trust in the Turkish Central Bank, the Turkish lira, and the Turkish economy, as all the three become subjects of unpredictable willpower of higher authorities. Nothing specific to Turkey, though: that's a common curse of most developing countries - especially those whose leaders prefer to shrug off the unnecessary burden of democratic social development with its corresponding economic attributes...

Commenting on the event, the Turkish Treasury and Finance Minister said the Turkish lira will keep circulating in a free-market and liberal foreign exchange environment. Objectively, there was little else to say to prevent a total flee of global investors. Fundamentally, that means that very likely, the Turkish lira will follow a very similar trajectory to what happened in August: a short-lived drop of USD/TRY following by the all-erasing rise to new all-time highs.

Short-term: correction down to 7.50

The area above 7.50 may well be a target for bears just to stabilize the currency pair.

Given such an unstable political and economic environment, there is little choice for USD/TRY but to rise - very probably, up to 8.00 and above. 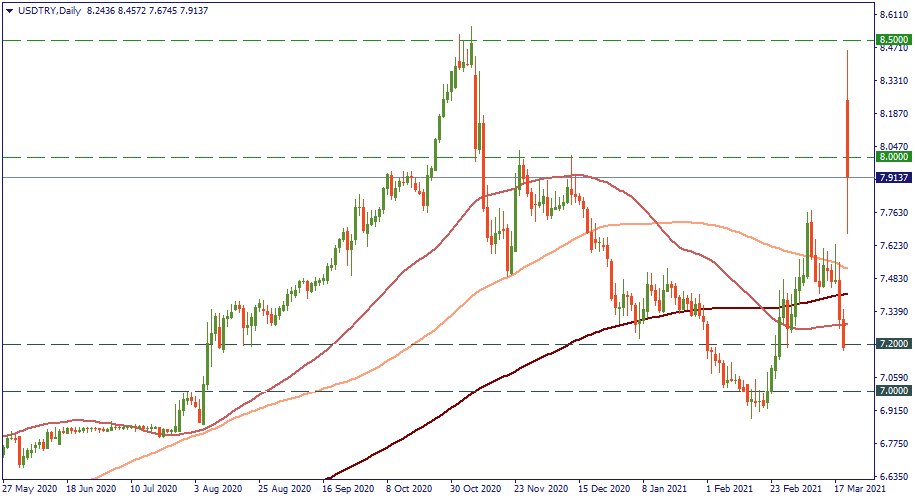