Bitcoin is ... digital gold. And, in my opinion, it’s probably a lot better than gold, but there is no trusted third party involved, and that’s the huge difference.

This week was super optimistic for Bitcoin bulls. Many positive events in the crypto market, including the announcement of Facebook’s crypto project Libra, pushed the digital asset higher. At the moment, it is looking forward to the breakout of the $9,800 level on the daily chart. If it happens, the next resistance will lie at $10,700. As far as it is broken, the further rise may be limited by the $11,420-$11,777 levels. From the downside, we need to pay attention to the $8,940, $8,664 and $7,970 levels. Awesome oscillator is moving upwards, which is a good signal of the possible further rise. 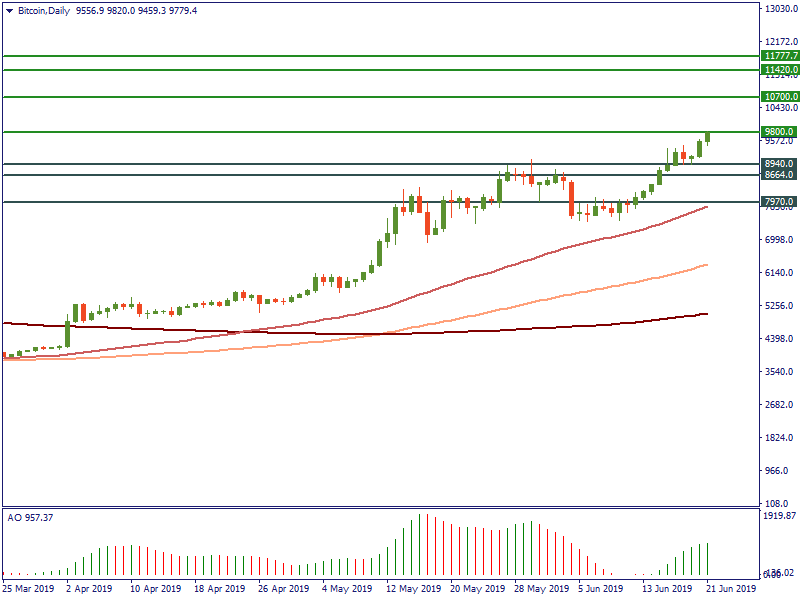 ·        The South Korean crypto regulator promised to pay damages to users in case of hackers’ attacks or system lags.

·        The Brazilian authorities obligated local and international crypto exchange platforms to share almost all of the users’ transactions.

·        The Ethereum developer Justin Drake announced that the switch to Ethereum 2.0 was planned to start on January 3, 2020.

·        On Tuesday, Facebook's crypto project Libra was presented. Mark Zuckerberg introduced a new website, where you can find the white paper of a project. After the critics by different governments, the developers noted that the project would share with authorities the users' data. Also, Libra Investment token was introduced. The launch of Facebook's cryptocurrency is expected next year.

·        Litecoin Foundation together with Bibox exchange platform and Ternio startup will release a debit crypto card.

·        CEO of TRON announced the update of the network to the new version called Odyssey 3.6, to increase the protection and the possibility of dApps creation.

·        100 of leading Japanese producers, including Mitsubishi Electric and Yaskawa Electric, agreed to launch a collaborative blockchain system for the data exchange.

·        The IT department of Samsung launches products for using blockchain in different types of business.

·        Firefox developers detected and eliminated the vulnerability which could be used for stealing crypto. It’s recommended to update the browser to the latest version.

·        Japanese messenger LINE can get a resolution to create its own crypto exchange platform soon.