What Happens to EUR?

On April 22, 2022, from 10:15 to 11:00 MT time, the Markit will release German and French flash services and manufacturing PMI. It’s usually published monthly. PMI measures the diffusion index level based on a survey of purchasing managers in the manufacturing industry. It’s a leading indicator of economic health. Businesses respond quickly to market conditions. Their purchasing managers have perhaps the most up-to-date and relevant information about the company’s views on the economy.

How can EUR react?

The sanctions against Russia have led to skyrocketing energy prices in the EU. Inflation in Germany is at its highest level since the country’s reunification in 1990. According to Eurostat, the annual inflation in the Eurozone reached 7.5% in March compared to 5.9% in February. It has been hitting record highs for five months in a row. According to the agency, energy prices rose 32% in February. Then, in March, the prices increased by 44.7% from the February numbers. All this was due to the oil and gas crisis fueled by the EU-Russia tensions after Russia invaded Ukraine.

The previous result was better than expected, with Actual figures at 57.6 against the forecasted 55.9. It provoked a short-term fluctuation of 260 points. 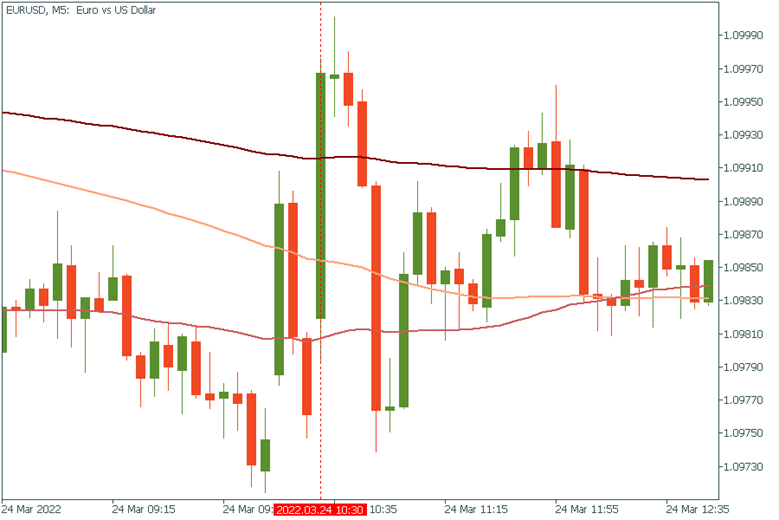 How to trade on European PMI release?

PMI is a crucial release. Thus, it’s most likely to influence all EUR pairs. To notice active price movements, follow other EUR-related news and analyze all the events together.